THANK GOD for listening and trust in HIS WILL to be done. “BE STILL AND KNOW THAT I AM GOD.”  Psalms 46:10

Never before in the history of this country has this plea been so necessary…..In God We Trust, and we pray that GOD WILL BLESS AMERICA!!!

DON’T EXPECT ANY SUPPORT OR SECURITY FOR CHRISTIANS NATION-WIDE OR WORLD-WIDE FROM HILLARY CLINTON OR THE RADICAL LEFT!  MANY CHRISTIANS HAVE BEEN AND ARE DYING BECAUSE OF CLINTON/OBAMA POLICIES AND ACTIONS!  THE ONLY RELIGIOUS FREEDOMS THEY SUPPORT ARE THOSE OF MUSLIMS AND OTHERS!  THEY ARE ANTI-CHRISTIANS!!  MAKES ME WONDER WHAT DEMOCRATS REALLY BELIEVE!!  WAKE THE HECK UP!!

TO: All complicit media idiots that can’t shut up and will probably never be for Trump, and all of you stupid people that are so fickle on a day to day basis about Trump this, or Trump That!  You are sickening to the core!  That’s right!  Sickening!  Sickening!  Sickening!  Get your heads out of the sand and other places!!!

Trump wants to least do some things to close up and strengthen our borders and keep the bad elements out!  He’s just one man that wants to make a difference where no one has accomplished near enough on this subject for many years!  It’s an up hill climb in every respect seeing that Crappy Politicians like Paul Ryan, Mitch McConnell, and their Ilk/Cronies, and their elitist donors’ and corporatist buddy’s don’t want to close the borders at all–they are no better than radical stupid Democrats!  The one side is all for cheaper labor from an influx of illegals, and apparently the other side wants more illegals in so that they can get more of a voter base and they can stay elected and keep on screwing America and Americans!  I figure that all of them are just in it for themselves and to hell with all of us!!  It’s all about money and power!!

On the other hand, you idiots and dim-wits that keep hammering on Trump are so damn stupid!  It’s ridiculous to be criticizing Trump who’s at least trying to do something right, and then giving the evil opposition a pass!  You aren’t even intelligent enough to see that Hillary Clinton is going to pack at least 550% more immigrants and resettler’s from dangerous countries around the world into our America!–most of them being Muslim Extremists that will not ever assimilate into our country and will never be good Americans, many mean us harm, etc.!  Maybe they will even be placed in a neighborhood near you!  Don’t you remember the story about the Trojan Horse!  Don’t assist in allowing an invasion of Radical Muslims into our country, and don’t be supportive of any one entering our America illegally!!  It’s already been happening and it needs to be stopped!  Work With President Trump To Solve These Immigration Problems And Uphold The Laws That Are Already On The Books!!

DON’T BE STUCK ON STUPID!  START BEING GOOD AMERICANS AND STAND UP FOR AMERICA, AND SUPPORT/STAND UP FOR DONALD TRUMP!!  VOTE TRUMP/PENCE!!

Any of you that are stuck on the fence and can’t get out of your own way; are wanting to vote your conscience; were Cruz, Rubio, or whoever supporters; who don’t like Trump for reasons that you can’t even really identify; are politicians that are scared to death that voting for Trump could get in the way of your perks, benefit’s, and big paychecks, etc.; are big donors that are stuck on greed, power, and stupidity!  All of you need to get a grip on yourselves and rally behind Mr. Donald Trump!  Yes, that means you, the Bush Family, and you Ted Cruz, and you Marco Rubio, and you Paul Ryan, and you Mitch McConnell, and all of you self-centered donors, elitists, establishment dwellers, and crony capitalists–including Romney, the stupid so called over conservative types, and any other knuckle-heads that can’t see the forest for the trees!  Any negative media can just suck eggs!  All good Americans need to vote for Trump!!

Mr. Donald Trump is Our Good and Patriotic Candidate whose running for the Presidency of our United States!  Get over yourselves and any bad and destructive attitudes that are just plain embarrassing to witness!  There is just one evil enemy running for the presidency and that’s Hillary Clinton!  Get your stuff together and stand with and by Mr. Donald Trump!  Let’s all severely defeat that well known and evil enemy, Hillary Clinton, and run she and hers’ out of politics and out of town!

VOTE FOR, SUPPORT, AND ELECT MR. DONALD TRUMP TO BE OUR NEXT PRESIDENT OF OUR UNITED STATES!!  THERE IS NO OTHER REASONABLE CHOICE!!  GET OFF OF YOUR BUTTS AND MAKE IT HAPPEN!!  IF MR. DONALD TRUMP DOESN’T GET ELECTED, THEN ALL OF THE HELL THAT BREAKS LOOSE IF THE HILDABREAST DOES WIN, WILL ALL BE YOUR FAULT AND ON YOUR BACK!!  DON’T EVER LET THE HILDABEAST AND HER DEVIATE HUSBAND AND THEIR CLINTON FOUNDATION CRIME FAMILY BACK INTO OUR WHITEHOUSE!!

VOTE TRUMP/PENCE FOR PRESIDENT/VICE-PRESIDENT!!  JUST DO IT !!

DON’T VOTE FOR ANYONE BUT TRUMP!!  STAYING HOME OR VOTING FOR ANY ONE ELSE IS THE SAME AS VOTING FOR THE HILDABEAST!! 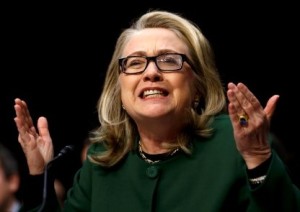 I totally hate the use of these words anywhere/anytime, but everyone needs to know more about this dirt bag, (Hillary Clinton), that some idiots, low information/misinformed citizens in this country may be voting for!

1) “Where is the God damn flag? I want the God damn fucking flag up every morning at fucking sunrise”. Hillary to staff at the Arkansas Governor’s mansion on Labor Day 1991. From the book “Inside the White House” by Ronald Kessler, p. 244

(2) “Fuck off!  It’s enough I have to see you shit-kickers every day! I’m not going to talk to you, too!  Just do your Goddamn job and keep your mouth shut.” Hillary to her State Trooper bodyguards after one of them greeted her with “Good Morning.” From the book “America Evil” by Christopher Anderson, p.90

(3) “If you want to remain on this detail, get your fucking ass over here and grab those bags!” Hillary to a Secret Service Agent who was reluctant to carry her luggage because he wanted to keep his hands free in case of an incident. From the book “The First Partner” p. 25

(4) “Stay the Fuck back, stay the Fuck back away from me! Don’t come within ten yards of me, or else! Just fucking do as I say, Okay!!?” Hillary screaming at her Secret Service detail. From the book “Unlimited Access” by Clintons’ FBI Agent-in-Charge, Gary Aldridge, p.139

(5) “Where’s the miserable cock sucker?” (a.k.a.: “Bill Clinton”) Hillary shouting at a Secret Service officer. From the book “The Truth about Hillary” by Edward Klein, p. 5

(6) “You fucking idiot” Hillary to a State Trooper while he was driving her to an event. From the book “Crossfire” ~pg.  84

(7) “Put this on the ground! I left my sunglasses in the limo.  I need those fucking sunglasses!  We need to go back! Hillary to Marine One helicopter pilot to turn back while in route to Air Force One. From the book “Dereliction of Duty” p. 71-72

(8) “Come on Bill, put your dick up! You can’t fuck her here!!” Hillary to Gov. Bill Clinton when she spots him talking with an attractive female. From the book “Inside the White House” by Ronald Kessler, p. 243

There it is ……..book, chapter and page…….the real Hillary

Additionally, from Unlimited Access by FBI Agent Gary Aldridge, when she walked around the White House, NO ONE was permitted to look her in the eye, they all had to lower their heads with their eyes towards the ground whenever she walked by.

This ill-tempered, loud-mouth, hateful and abusive woman wants to be your next President, and have total control as Commander-in-Chief of our Military, the very military for which she has shown incredible disdain for throughout her public life.

Remember her comment about Benghazi: “What difference at this point does it make?”   SHE WAS PRIMARILY RESPONSIBLE FOR THEIR DEATHS!

WHAT’S ON MY MIND IS THAT WE HAVE A PATRIOTIC AMERICAN IN THE NAME OF MR. DONALD TRUMP THAT LOVES OUR COUNTRY AND WANTS TO MAKE A DIFFERENCE THAT CAN ONLY MAKE OUR LIVES BETTER!  APPRECIATE HIM!  HE’S REALLY ALL WE’VE GOT BEFORE MORE GLOOM, MORE EVIL, AND MORE TYRANNY!  DON’T KICK A GIFT HORSE IN THE MOUTH!  WE ARE LUCKY AND FOTUNATE THAT HE IS WIILING TO STEP IN AND TRY AND STRAIGHTEN THINGS OUT!!  SHAME ON ANYONE THAT TRIES TO TEAR HIM DOWN AND SPEAKS ILL OF HIM!  PRAY FOR THE CONTINUING SAFETY AND GOOD HEALTH FOR MR.TRUMP, HIS FAMILY, AND EVERYONE AROUND HIM!  KEEP OUR AMERICA IN YOUR PRAYERS, AND BLESS GOD WITH YOUR THOUGHTS, WORDS, ACTIONS, AND DEEDS!!

THERE SEEMS TO BE NO END TO THE BUNCH’S OF MISFITS AND DUMMIES OUT THERE THAT CAN’T SEE THE FLOWERS FOR THE TREES!  WAKE THE HECK UP AND VOTE FOR DONALD TRUMP!  AND NO ONE ELSE!  VOTE AFTER YOU’RE TRULY EDUCATED ON ALL OF THE ISSUES AND TRUE FACTS!  DON’T VOTE FOR EVIL!!  DON’T VOTE FOR HILLARY CLINTON!!

SEND CROOKED/CRIMINAL HILLARY CLINTON AND HER CROOKED/DEVIATE HUSBAND BACK TO ARKANSAS AND SAVE OUR AMERICA!!  I HOPE AND PRAY THAT THEIR EVIL FOUNDATION GOES BROKE!  DON’T TAKE ANYTHING I SAY HERE LIGHTLY OR DISMISSIVELY!!  BE A REAL GOOD AMERICAN AND STAND UP FOR AMERICA!!

GO TO “YOU TUBE”  AND LISTEN TO  “ONWARD CHRISTIAN SOLDIERS”

JUST CONSIDERING A SCARY CLINTON PRESIDENCY ALONE–HER LIBERAL/PROGRESSIVE CHOICES FOR THE SUPREME COURT AND OTHER COURTS WOULD OPEN THE WAY TO MORE ATTACKS ON OUR RELIGIOUS FREEDOMS, IT WOULD OPEN THE DOORS TO MORE ABORTION MURDERS WITH MORE HORRIFIC ABORTION PRACTICES, AN END TO OUR FREEDOMS OF SPEECH, THERE WOULD BE FURTHER ATTACKS ON HETEROSEXUAL MARRIAGES AND NORMAL FAMILIES, THERE WOULD BE MORE DEGRADATION OF EVERYTHING GOOD AND AN INCREASE IN EVERYTHING BAD, AND THERE WOULD BE THE END TO OUR SECOND AMENDMENT RIGHTS TO KEEP AND BEAR ARMS SO WE COULD NEVER DEFEND OURSELVES AGAINST HER TYRANNY AND EVIL, ETC., ETC.!!

HILLARY CLINTON IS ALSO FOR MASS IMMIGRATION AND RESETTLEMENT OF MUSLIM REFUGEES FROM SYRIA AND OTHER DANGEROUS AREAS OF THE WORLD!!  SHE IS PLANNING TO INCREASE WHAT OBAMA IS AREADY DOING BY 550%!!–ETC., ETC.!!  NEVER FORGET THAT SHE HAS BEEN A MEMBER OF THE OBAMA ADMINISTRATION FOR MANY YEARS!!  SHE IS ALSO GOING TO RAISE TAXES ON EVERYONE, EVERYWHERE IN OUR COUNTRY BY EXTREME AMOUNTS!!  SHE HAS LOTS OF EXPERIENCE AT DOING LOTS OF DAMAGE, AND SHE IS EXTREMELY CORRUPT!!